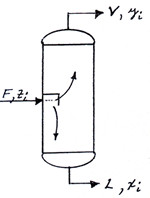 Occasionally the occurrence of retrograde condensation phenomena is encountered in the design of refineries and gas processing plants.  In this paper, we analyze retrograde phenomena in a typical natural gas mixture and then specifically address the occurrence of this phenomenon in hydrogen-containing systems.  It will be demonstrated that a very small change in the concentration of hydrogen can have a dramatic effect on the shape and location of the P-T phase envelope, especially on the bubble point locus.

In light of the above analyses, we then provide an explanation to the observations made for two case histories reported for a naphtha unifiner reactor effluent stream and a high pressure bottoms liquid stream involved in a hydro-desulfurizing unit.  Both cases histories studied here involve petroleum fraction-rich streams containing a rather small concentration of hydrogen.